Most people have no idea just how much hands can tell about them. The unique nature of fingerprints alone stand as a testament to the truly personal nature of the hand, but fingerprints are only one small way that the lines of our hands identify us.

Palmistry is not simply about random interpretations and subjective outcomes. Like all branches of magick, it is deeply rooted in science. Overwrought stereotypes tend to minimize its verity and suggest that it is something less than what it actually is. Palmistry tells the story of the soul that inhabits the human body. The lines of the palm are an archive of the soul's history and they also provide insights to where the soul's journey is leading during its current incarnation.

To make the point clear, let's look at the science that drives Palmistry. In 1853 Meissner proved that there was a definitive molecular value to the lines in the hands that are evidenced in the presence of corpuscles that were later dubbed Wagner-Meissner Bodies and, later still, “tactile (or “touch”) corpuscles. These corpuscles distribute themselves in a manner that is unique in relation to the rest of the body and emit vibrations that are as unique to the individual as a thumbprint. A person's health and demeanor directly affect these vibrations and, along with all other physical and cognitive functions, shuts down at or near the point of death.

Now, I don't want to go off on too many tangents (although the scientific nature of Palmistry is truly fascinating) but I think it is important to understand that these claims are not rooted in superstition. While certain details and interpretations may vary from practitioner to practitioner (in regards to timing, impact, etc.), the whole story of the soul told through the lines of the hand resonates through the sum of its parts.

So why, if science has known for centuries that the human hand holds such insights into the individual, is it still considered an imprecise or even theatrical practice (the phrase, “for entertainment purposes only” comes quickly to mind)? One of the prevailing obstacles to the effective study of Palmistry in the mainstream is the literal centuries-old assault on all things magickal by religious organizations and, in modern times, popular media. We have all seen the stereotypical gypsy fortune-tellers in movies or on television tracing lines with their fingers and gasping as the lines “reveal” various life-changing calamities to the obvious chagrin of the unwitting victim. 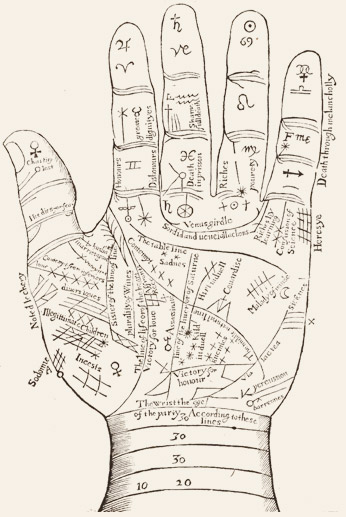 A vintage map of the palm

Real Palmistry has tremendous capability to impart insights that may not be discovered in other ways, and certainly not in any way so personal or precise. To the trained practitioner, the human hand is the single best and most accurate way to answer questions about the individual, and is duly validated by those who have practiced and developed the art through the centuries, crossing virtually all cultural and religious barriers to endure even until the modern day where skepticism and criticisms of all things spiritual abound.

The practice of Palmistry can be traced back to some of humanity's earliest civilizations. From East to West, some of the greatest minds in history have embraced it as a means of gaining an understanding of who we are and where we are headed as a species. Spiritual disciplines from China to Persia and India, even Greece and Rome have employed Palmistry to increase their understanding of the individual and their correlation to the Universe itself. The Hindus had a particularly profound contribution to the development of Palmistry and were almost singularly responsible for the spread of this type of divination throughout Asia. There is even evidence to suggest that the ancient Sumerians, arguably the oldest of human civilizations, developed and practiced it in primitive forms.

But there may be no greater contribution to the art and science of Palmistry than that brought by the ancient Greeks. A deeply spiritual people – and arguably the most intellectual and even skeptical of any civilization – brought the concept of Cheiromancy (the scientific name for Palmistry) out of the realm of Occult and Pagan mystery religions into the mainstream. The same people who shaped methods of modern education and whose philosophies have endured to this day in advanced collegiate study for their profound insights into humanity also viewed Palmistry as a legitimate avenue to understanding and enlightenment.

If you are reading this, you are among an enviable segment of the population. You recognize the metaphysical nature of humanity and you are sensitive to the subtle yet easily identifiable truths that exist around us and vibrate within us. Your inward journey into the world of Palmistry is just beginning and in the pages that follow it is my sincere hope that you will discover a new and exciting avenue into understanding who you are, where you have been and where you are going. Approach the material within with an open mind and with the intention to learn and the Universe will respond with the understanding you seek.